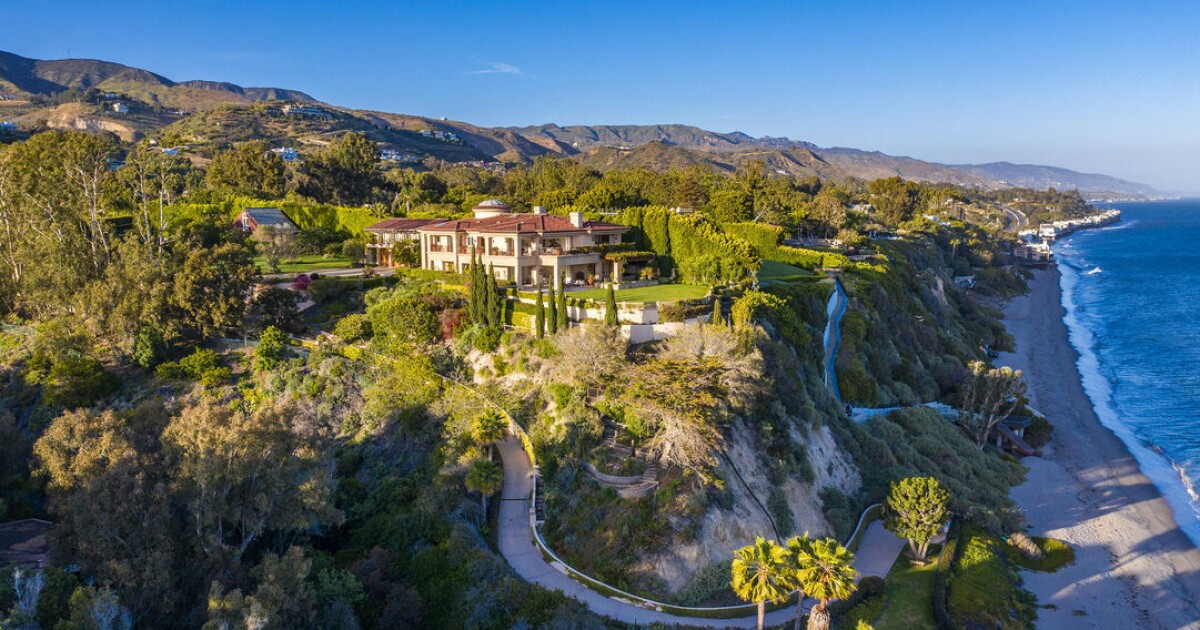 Welcome back to the Real Estate newsletter. Ambition seems to be at an all-time high as sellers across Southern California chase colossal profits and record-breaking prices.

Perhaps the most ambitious is Tamara Gustavson, the daughter of self-storage mogul B. Wayne Hughes, who founded Public Storage and donated much of his fortune to charity (including more than $400 million to USC) before he died last year. Gustavson now owns his Malibu compound, and she’s shopping it around for $127.5 million.

The gargantuan price tag makes it the fourth-most-expensive home currently on the market in L.A. County, but the potential profit margin is even more notable considering Hughes paid just $20 million for the property in 2003. Offering a rare combo of size, scale and location, the estate spans 3.5 acres above Paradise Cove and features three homes and more than 200 feet of beach frontage.

Another ambitious seller is biotech entrepreneur Roy Eddleman, who bought a prized Italianate mansion known as Villa Firenze at auction for $51 million last year. At the time, it was the most ever paid for an auctioned home, but now he’s trying to sell the estate for $120 million.

It checks all the boxes for a mega-mansion — prime location in gated enclave Beverly Park, plenty of space at over 31,000 square feet, etc. — but the price is a bit mystifying given that no major visible changes have been made to the property since it sold for $51 million just last year.

Over in Toluca Lake, billionaire Ron Burkle joined the fun by listing an iconic mansion built and owned for decades by comedian Bob Hope. After buying it for $15 million in 2018, Burkle is putting it on the market for $29 million.

Not only is that nearly double what he paid just four years ago, but if he gets his price, it would be Toluca Lake’s priciest home sale ever — by a lot. The current crown belongs to a lavish mansion in the San Fernando Valley neighborhood bought last year by “This Is Us” creator Dan Fogelman for $17.5 million.

Our final two listings take us outside L.A. The first belongs to actor Alexander Skarsgård, star of “True Blood,” “Big Little Lies” and “The Northman.” He’s asking $2.6 million for his Manhattan penthouse, which he fixed up during his five-year stay.

In Las Vegas, poker player Chance Kornuth put his desert abode up for grabs at $3.5 million. The custom home comes with a wine cellar, game room and entertainment loft, as well as a rooftop deck overlooking the Strip.

As always, while catching up on the latest, visit and like our Facebook page, where you can find real estate stories and updates throughout the week.

Tamara Gustavson — daughter of B. Wayne Hughes, the late self-storage titan who donated a record $400 million to USC — is asking $127.5 million for her prized Malibu estate.

It’s a massive sum, and one that showcases the dramatic surge of Southern California’s luxury market since the turn of the century. Records show Hughes bought the property for $20 million in 2003.

At $127.5 million, it’s the fourth-priciest property on the market in L.A. County, but in a community as affluent as Malibu, astronomical prices are a way of life. Venture capitalist Marc Andreessen redefined the market last year when he paid $177 million for a Malibu compound, and former Disney Chief Executive Michael Eisner is currently shopping around his home a few miles away for $225 million.

When biotech entrepreneur Roy Eddleman bought Villa Firenze at auction for $51 million, real estate sources considered it a steal — given that the Beverly Park mega-mansion originally surfaced for sale at $165 million.

A year later, Eddleman is hoping to flip the prized estate for a huge profit, listing the Italian-inspired showplace for $120 million — making it the fifth-most-expensive property on the market in L.A. County.

It’s a massive ask, especially considering there have been no major visible changes to the property. But in Beverly Park, all bets are off. Sylvester Stallone sold his home there to Adele for $58 million in February, and Mark Wahlberg is shopping his place around for $87.5 million.

Villa Firenze rivals any other mansion in the uber-affluent neighborhood in both size and scope, with 12 bedrooms and 16 bathrooms across more than 31,000 square feet. It combines three lots across nearly 10 acres and comes with a guesthouse, pool house, swimming pool, tennis court, basketball court, soccer field and something the listing refers to as a “child’s maze.”

Four years after buying Bob Hope’s longtime estate in Toluca Lake and restoring it to its former glory, billionaire businessman Ron Burkle is shopping it around for $29 million.

That’s nearly double the $15 million he paid for it in 2018. The extensive renovation saw Burkle modernize the living spaces with high-end fixtures and finishes but preserve the residence’s classic elements — including Hope’s oak library and a one-hole golf course that the late comedian designed himself.

If he gets his price, it will be the most expensive sale in the history of Toluca Lake, according to the Multiple Listing Service.

The trophy home is one of many that Burkle has owned over the years. He sold Frank Lloyd Wright’s iconic Ennis House for $18 million in 2019, and his current real estate portfolio includes Bob Hope’s futuristic Palm Springs retreat and Michael Jackson’s Neverland Ranch.

Actor’s loft gets better with age

Alexander Skarsgård, the Swedish actor who starred in “True Blood” and the recent film “The Northman,” has listed his Manhattan penthouse of five years for $2.6 million.

That’s $300,000 more than he paid for the unit in 2017, but the price bump comes with some upgrades. Skarsgård fixed the place up during his half-decade stay, remodeling the kitchen and touching up the walls and warm pine floors.

Found in the East Village, the prewar home is tucked atop a townhouse built in 1845. It’s part of a co-op, and the $2,222 monthly HOA dues pay for maintenance, a live-in superintendent and the common garden.

Poker pro Chance Kornuth is testing his luck in the Nevada desert, listing his home overlooking the Las Vegas Strip for $3.5 million.

That’s more than double what Kornuth — who’s currently ranked third in the U.S. in the Global Poker Index — paid for the property in 2018. The house was finished a year later and has been upgraded with custom accents and high-end amenities across more than 6,000 square feet.

The two-story home occupies half an acre in Southern Highland, a golf course community at the foothills surrounding the city. It’s perched at the top of the neighborhood and takes advantage of the scenic setting with multiple balconies and a rooftop deck with views of the Strip.

The nation appears to have housing FOMO, with rising interest rates to blame. Pending U.S. home sales — those are houses with signed contracts — are falling but home listings have jumped, CNBC reports, as homeowners scramble to get in before the market cools off.

Realtor.com took a peek at the Caribbean real estate market, profiling the priciest home in Puerto Rico. Listed for $48 million, the 277-acre equestrian estate comes with a hacienda-style home, 60 stables and an indoor training center. It’s by far the most expensive home on the island; for reference, there are only a few dozen properties listed for more than $10 million.